The well-known game Lemmings is now available on Android & iOS. Guide the friendly creatures safely to their destination before they hurt themselves.

Lemmings is a real game classic that appeared on the Commodore Amiga PC for the first time in 1991, and then came into the hands of Sony. The success of this game series lies in the simple but extremely brutal concept. The Lemmings are a group of beings who travel together through a course of dangers. You take charge of the group, and you give every Lemming a task. Suppose there is suddenly a ravine that needs to be crossed, then you choose a Lemming that builds a bridge.

That all sounds very simple, but that is by no means easy because the creatures are extremely suicidal, or very stupid. If one Lemming builds a bridge, then the other is able to simply walk over the unfinished bridge and collapse the ravine. You can only prevent this by giving another Lemming the specific task of stopping the other Lemmings from the bridge until it is finished. If you lose too many creatures on the way, then the level is failed.

The concept behind Lemmings is very fine and perfectly applicable as a mobile game. The new game has, of course, a complete visual overhaul, and it contains thousands of new levels. You can also take it online against other players in tournaments, looking at how many Lemmings survive and in which time they have achieved their goal.

The levels take place on different planets, so you can sometimes encounter and collect Lemmings that have a completely different look. Finally, there is also a building section where you can create a world for your collected beings to live. Watch a video with the gameplay above. 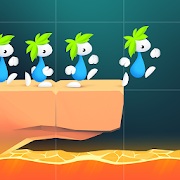